Amid devastating wildfires and evacuations, local precincts are asking the public to stop reporting false rumors that anti-fascist groups are responsible. 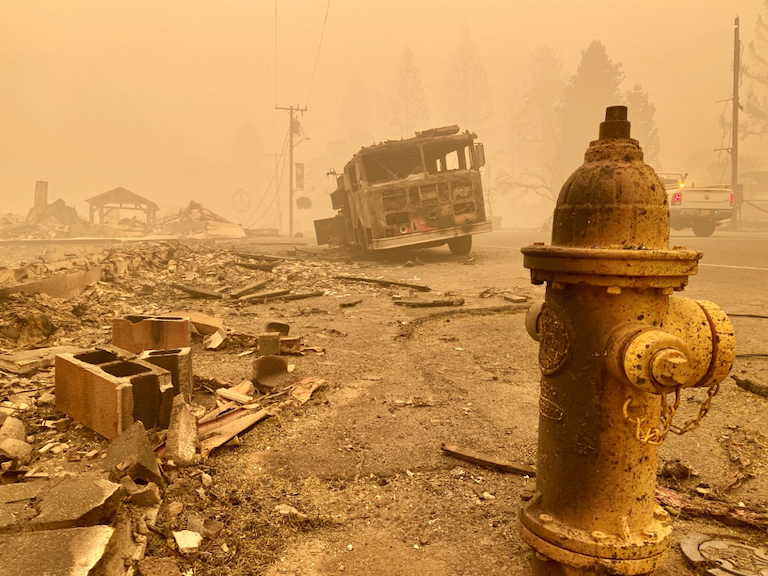 Burned out fire truck on OR 22 near Detroit

Oregon has been combating widespread wildfires for the past week, leading to the evacuation of more than 10% of its residents and counting.

During the chaos, conspiracy theories accusing Antifa for planning and instigating the wildfires erupted on social media. Local police and fire departments say the onslaught of inquiries and 9-1-1 calls has forced first-responders to focus on debunking these rumors on top of the current crisis.

Similar disinformation has not taken root  in other states experiencing wildfires, suggesting that its creators sought to capitalize on the killing of a Trump supporter in Portland, Oregon by an outspoken anti-fascist (who has no Antifa connection).

Several sites were involved in promoting and circulating the Antifa wildfire conspiracy theories, but QANon played an active role. Their central ringleader and informant, known as “Q”, posted a link to a tweet from a Republican Senate candidate, Paul Joseph Romero Jr., that falsely claimed law enforcement had “6 Antifa arsonists in custody”.

A Clackamas County Sheriff’s deputy has also bought into the conspiracy theories, but has been placed on leave for recorded statements blaming Antifa.

More than 35 people have died from wildfires spread across 12 western states. Nearly 5 million acres have burned from 94 major blazes since late August.

Across Oregon and some other western states, people have been advised to remain indoors due to hazardous air quality that could increase chances of lung infection, including COVID-19.